by Eileen Schmidt, one of the Bereavement Counselors who traveled to Mbita, Kenya in March 2012 to provide grief training to help orphaned children deal with their loss.

December 28, 2011 was the start of something great. Sharami and I met with SHARE to discuss the bereavement project for the orphans. The Kenyan teachers and principals were asking how they could better deal with grieving children and Sharami and I were asked to help. It was decided that Sharami, the Healing Hearts Coordinator, and myself, the director of counseling (both employed by United Hospice of Rockland) and Jeff, a pediatrician would be traveling to Mbita, a remote village in Kenya sometime in March, just before the rainy season.

The trip, which I feared was going to be grueling, started out with me arriving at JFK with 1 small suitcase for my clothes and 4 giant suitcases full of school supplies for the SHARE orphans donated by Pablo Casals Middle School (PS 181) located in Co-op City in the Bronx. A little over three weeks prior I was the guest speaker for classes 605, 705 and 805, all taught by my daughter Catherine. She had told the kids that I would be going to Kenya to teach teachers and principals about grief so that they could help the orphans and they wanted to know what they could do to help.

At the assembly they asked a gazillion questions and were very interested in helping in any way that they could. I asked for crayons, paper, pens and pencils. Just so that you know PS 181 is considered a poor school. What I got, in addition to what I asked for was everything and anything that a school age child could ask for….glue sticks, notebooks, pencil cases, glitter, tape, construction paper, staplers, stickers, erasers, paper clips, memo pads and coloring books and more. They even thought about the teachers and gave me 20 boxes of chalk, just in case they didn’t have any in Mbita. I had also given my daughter a list of students in each school that was a SHARE orphan and she had her class write letters to each one of them. I carried with me over 250 letters from the Bronx to Kenya all in the spirit of giving. Their generosity was overwhelming. So after paying the overage weight, the 250lbs of supplies went into the belly of the plane and soon after that I was in my seat as were my travel mates.

I consider myself to be somewhat of a traveler, been to most of the Caribbean, Europe and 35 or so states across the US, but nothing could have prepared me for the 24 hour journey to Kissumu. Finally, bleary eyed, we were met at the airport by SHARE staff who greeted us with open arms and wide smiles. Tomorrow we would continue our journey to Mbita, but for now we would eat and rest. Tomorrow is another day, as they say.

Jeep, ferry, jeep and 3 bumpy hours later we were at the Rusinga Guest House where we would start our classes in the morning. Alphonse, Lucy, Cyprina and Ken (our driver) all From SHARE seemed to be pleased with the accommodations. Since I did not know what to expect, I took a wait and see approach. I saw the chef in classic white garb throwing fish heads into what seemed like hot oil in a wok on charcoal right outside the front entrance of the hotel. Upon a closer look, this appeared to be the “kitchen” as on the next pile of charcoal was a pot of steaming rice. A few moments later lunch was ready.

There was no air conditioning and it was so hot. However, we were lucky enough to have running water. John, the hotel manager made us feel welcomed and after lunch went outside to sit in the courtyard so that Sharami and I could go over the presentation one last time.

There was a boy about 4 who just kept watching us with this curious look. We later learned he was one of the hotel maid’s sons. It was apparent that he had never seen people that looked like us before. Remarkably, he came over and without a word or a smile shook each of our hands. Then he just sat and watched us for what seemed like hours. Dinner was pretty much like lunch except there was chopped kale and the most delicious papaya that we had ever eaten. We turned in early with anticipation of the teaching the next day.

At 7 am breakfast was served and our class would start at 9. The room was quite busy with all of us, the 15 “students” and Sharami, Jeff and me. Each and everyone came to our table and shook our hands. Around 8:15 Sharami and I went to the conference room where our training was to be held at 9. The room was almost filled with the participants as they were very eager to learn about the grieving process. For the first day we would be doing a power point presentation based on the tasks of grief after introductions. You could hear a pin drop in the hot and stuffy conference room and we started with one of the clergy saying a prayer. They seemed to be hanging on our every word and taking notes furiously. You could feel the excitement in the room. Then it was tea time, which happens twice a day. (By the way tea in Kenya is wonderful, but the people are more wonderful.) The group that was so timid in the morning was animated, funny and full of life. I was so looking forward to the rest of the training.

Prior to our visit to Kenya we were told that the Kenyan people as a whole were reserved and did not talk about death and dying so we did not know what to expect. However, these principals and teachers were like sponges. And they were able to talk about HIV, AIDS, death, and grief openly and honestly. They truly wanted to learn about how deal with grief and they desperately wanted to help the orphans so that they can lead healthy and productive lives. No topic was off limits to them. At one point I asked the group why this training was so important to them. What I learned is that many of them were orphaned themselves and know how difficult it is when the culture is closed to the issues at hand. We were changing the thinking of the leaders of these schools and it felt great.

Lunch was again fish heads, kale and rice with bananas and papaya for dessert. The group had become cohesive and they were interacting with us like we have known each other for years. Back to class…..”Good after lunch” was the salutation and Sharami and I began to teach. “Excuse me, rude Americans one of the teachers said fondly, “You forgot to pray.” Each session must start with a prayer, a custom we were unfamiliar with. Asante sana (thank you) was said by all and to their astonishment and joy Sharami and I answered in unisons “Karabuni”. This became the joke for the rest of the sessions. We spoke Swahili!

In a very short time these wonderful educators have become so close to each other and us. During the didactics on day 2 of the training, we had demonstrated a session with Sharami being the student and I the counselor/teacher. We got a standing ovation. Now it was their turn. We asked for volunteers and hands shot up. (Role play can be very intimidating, so I was surprised at their response.) And for the afternoon everyone took turns between portraying the counselor and the students in serious counseling sessions. They enacted the gamut of scenarios. What a bunch of actors! We laughed and we cried and we all learned valuable lessons that afternoon. I learned feelings are universal, whether or not you express them or are allowed to show expression, that humor and laughter can cement relationships half way across the world and that these Kenyans are willing and able to change their thinking for the betterment of the future and future generations.

The next day we taught group work. So after the Morning Prayer, (we did not forget) Sharami and I demonstrated how to facilitate group. We gave them lots of material and exercises appropriate for the ages of the children they were counseling. Again the role play was that of a child and a group leader and everyone was eager to play a role. The scenarios that they came up with were based on their students and some of the stories brought tears to our eyes. What touched me was the generosity and compassion of a people we had once thought to be reserved.

And then we came to “graduation”. We had printed certificates for the training. We called each participant up and presented them with what we thought was a piece of paper. I have to tell you, it was like we gave them a million bucks. They were so proud and there was a lot of picture taking and hugging, laughter and tears all the way around. I know it sounds so cliché but the whole experience was life changing.

After the sessions, Lucy and Cyprina (SHARE social workers) went through the school supplies which were back in our hotel room. Francis, a principal for a middle school in Mbita came by. He was so overwhelmed and touched with the generosity of the Bronx students that he had tears in his eyes as he picked through the supplies that had been given to his school. He immediately took down the email address of my daughter to get in touch with her to thank her and to see if her school and his school could partner. They are working out the details.

We wanted to visit an orphanage/school of one of our “students” so the day before we were to start our long journey back we visited Brother Hosea at Our Lady of Orore. The welcome was unsurpassed. They had planned a lunch with the food that they grew on the grounds. It was a feast! We had a lovely afternoon and then Father John had heard that we were there and begged us to stop at his school a few miles away. He had all the children lined up waiting for us with anticipation. Each one of them shook our hands and wanted us to take their pictures. One of the boys about 7 squeezed my arm like a melon and looked up at me adoringly and said “You are so fat and beautiful!” I have never had such a sincere and wonderful compliment.

So life changing is no longer a cliché for me. I feel transformed from the generosity and openness of people that in my wildest dreams I never thought I would meet. My staff, my family and my clients have told me I look different and honestly, although words won’t do it justice, I feel different. I feel grateful for the experience in Kenya, I feel grateful for my family, friends and all that “things” that I take for granted. I feel changed, somehow….. as for the fish heads, kale and rice not so much. ASANTE SANA to SHARE for giving me the opportunity and to Catherine and 605, 705, and 805 for their generosity and love,

Eileen Schmidt is the Director of Counseling at the United Hospice of Rockland (NY). 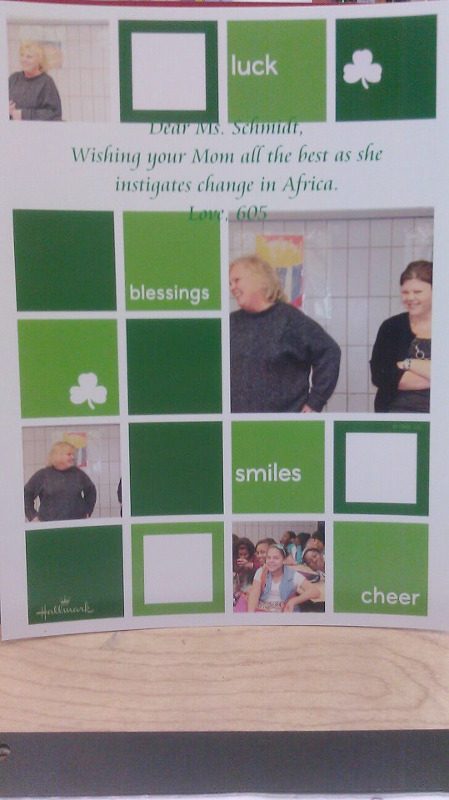 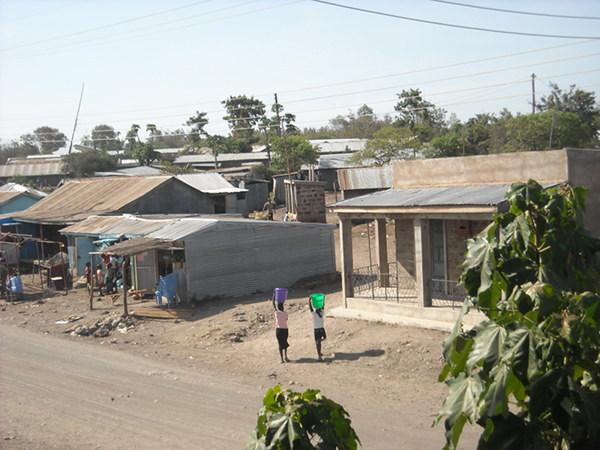 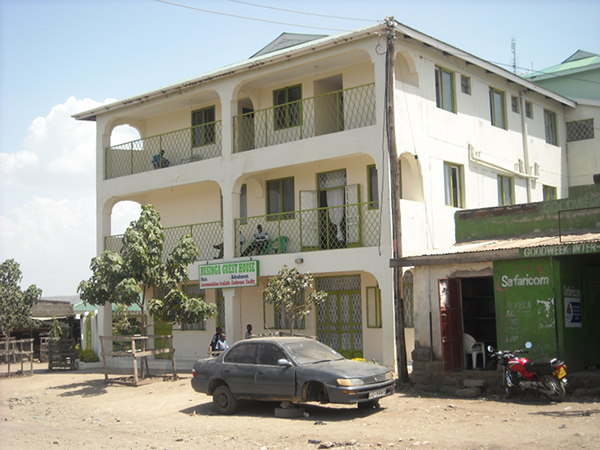 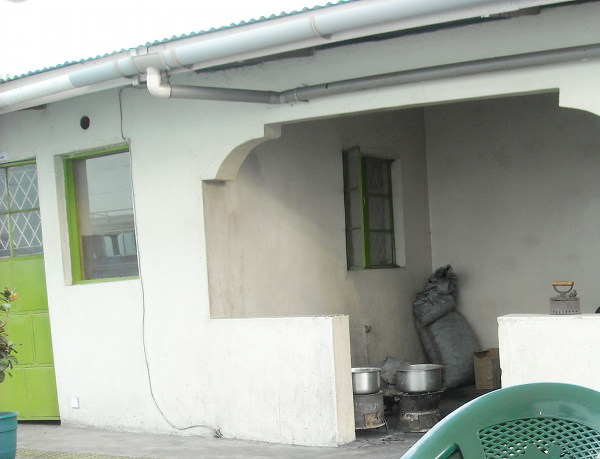 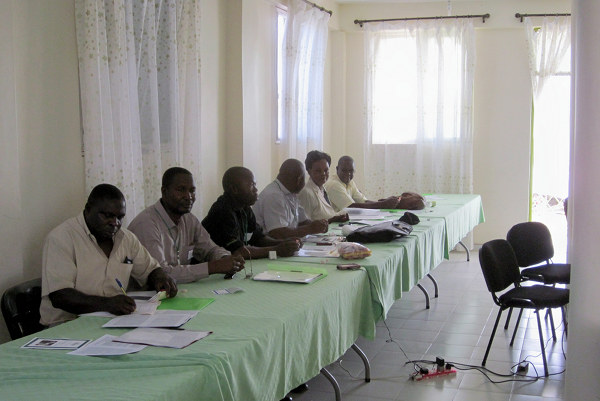 Classroom with some of the Grief Counseling Training participants. 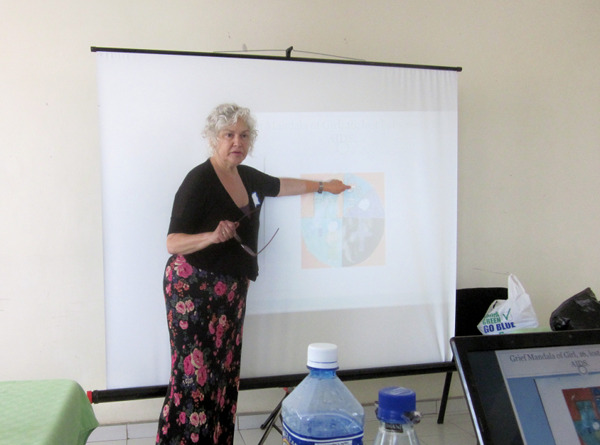 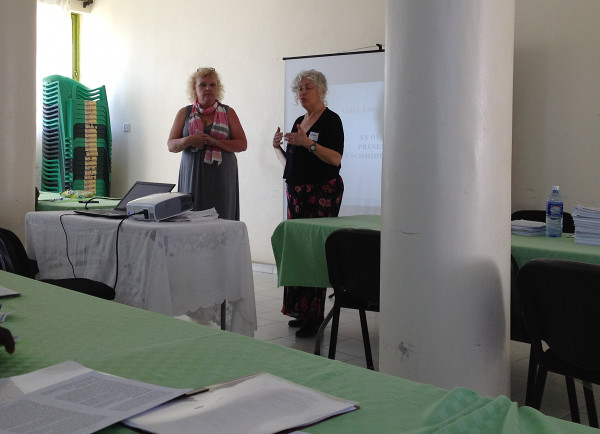 Sharami and Eileen during class. 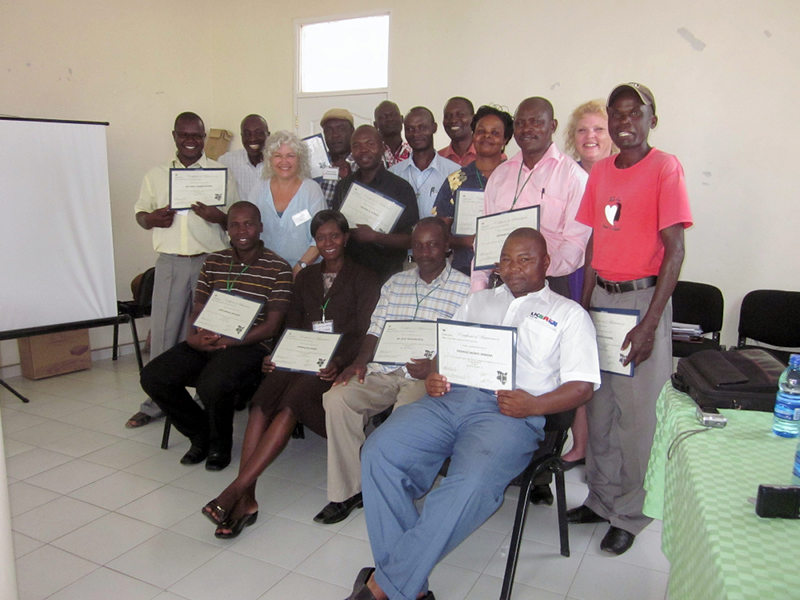 Participants after receiving their certificates, with Eileen and Sharami. 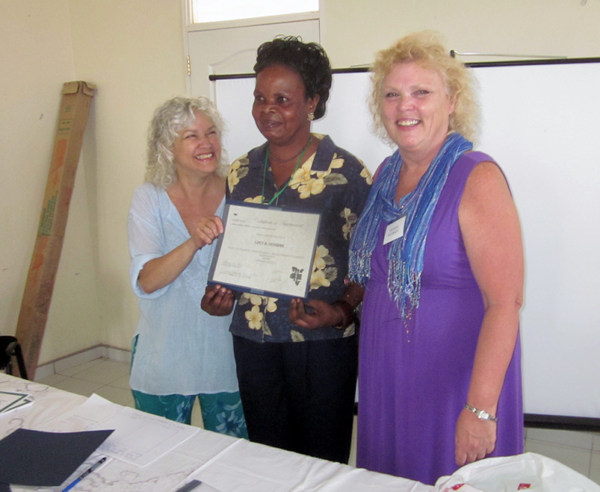 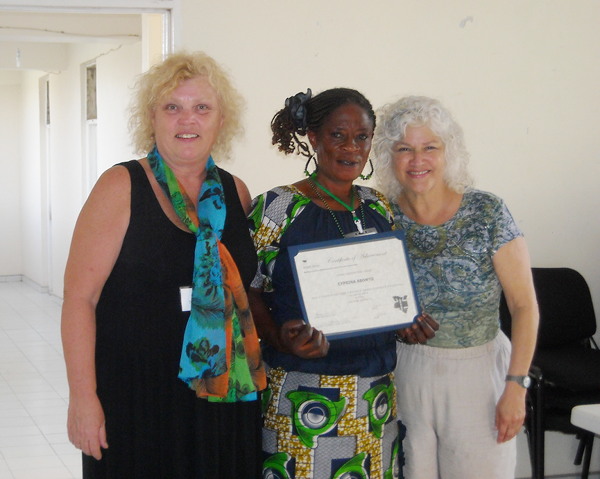